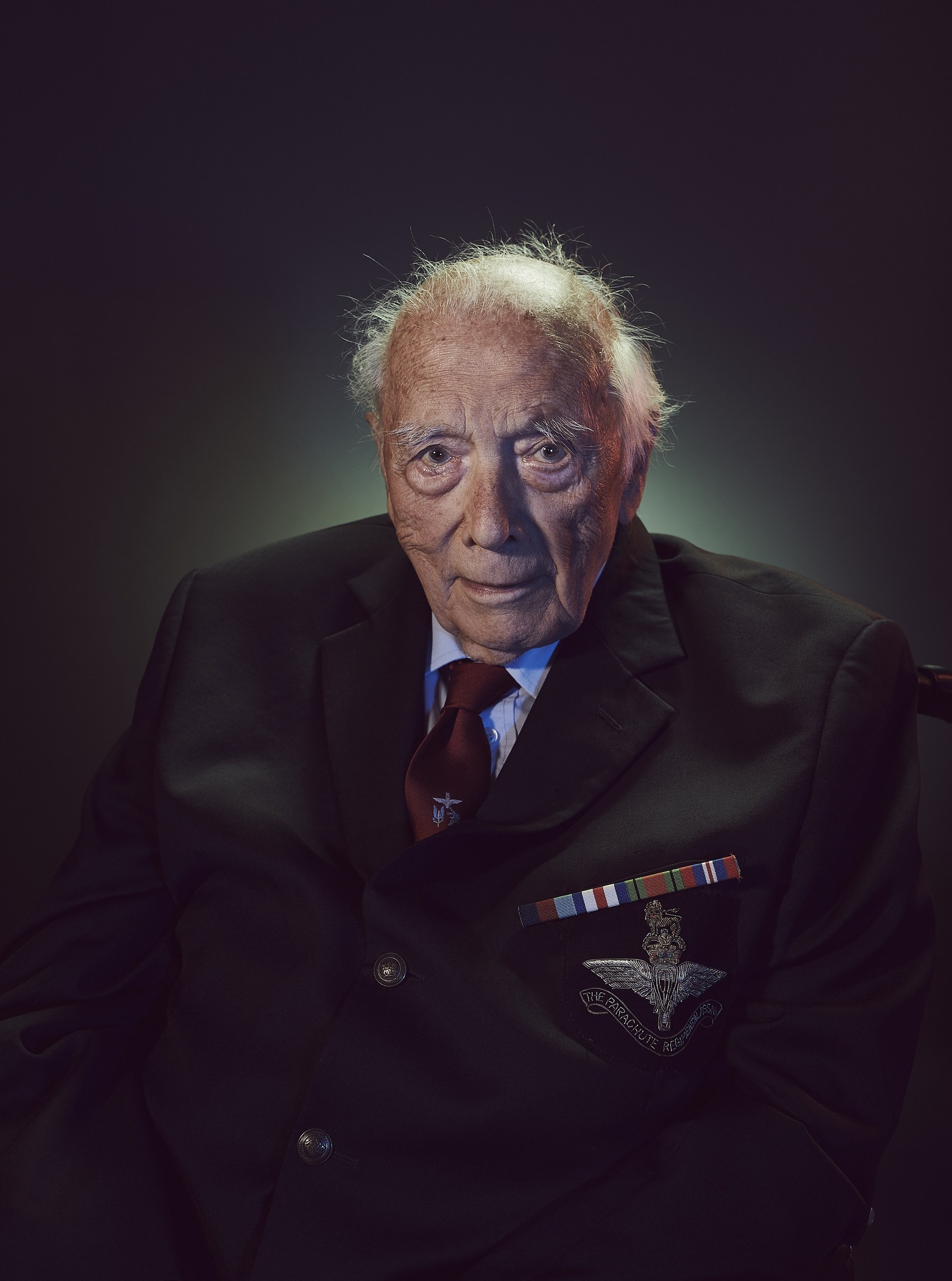 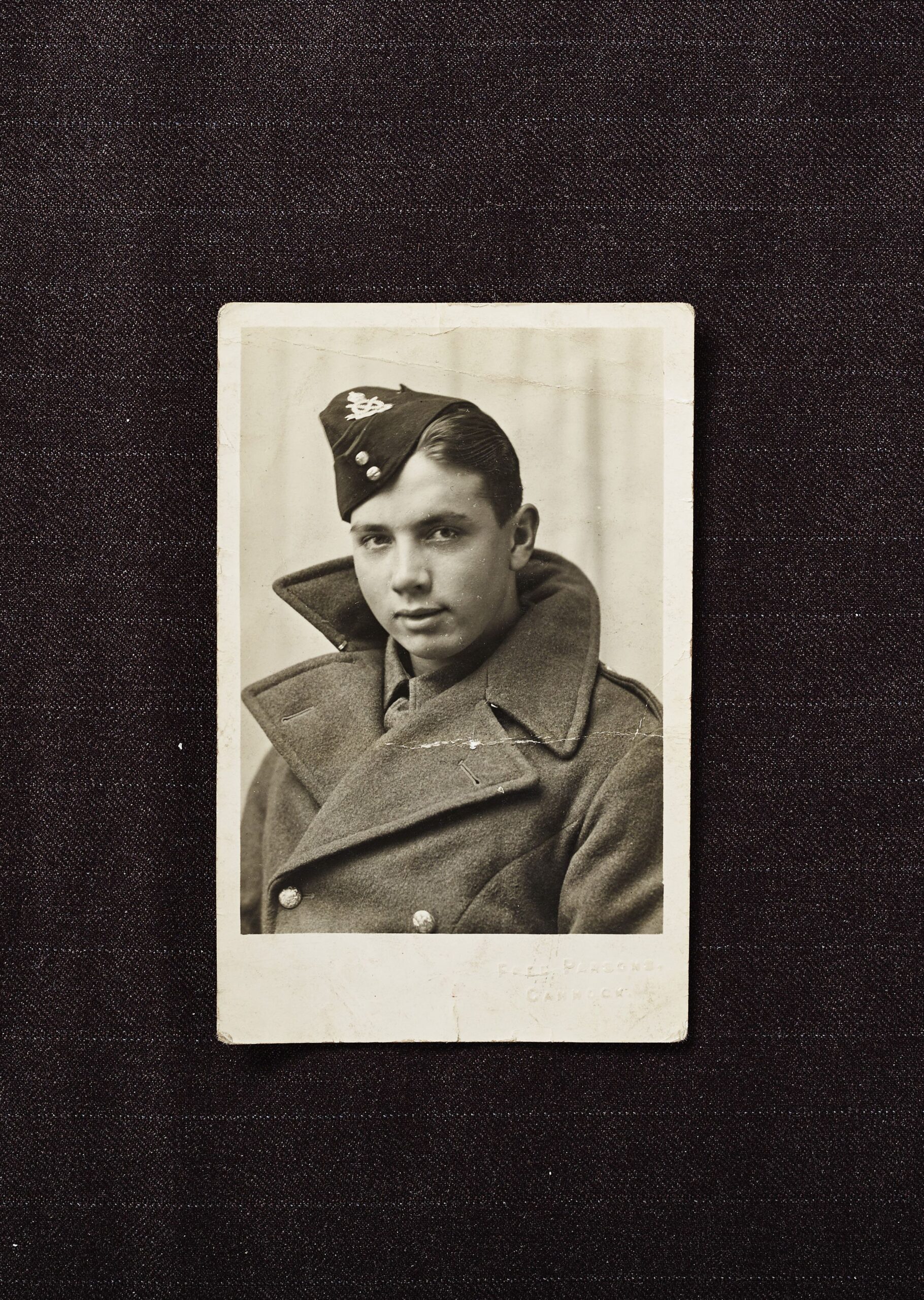 9th July 1943 the 4th Battery became part of the 6th Airborne Division and this is where Ralph really started his military career.

Ralph volunteered and was selected for Parachute training, detached for two weeks to RAF Ringway (now Manchester Airport), where he completed the required number of jumps to qualify as a Paratrooper. In the evenings he was able to meet his girlfriend, later his Wife Lois, who he had met when based in Hale.
The dropping zone for the trainee Paras was located in Tatton Park where a memorial to these brave men can be found.
6th June 1944, The Invasion of France, D Day
‘Operation Tonga’ a successful airborne forces operation by the 5th Parachute Brigade, British 6th Airborne Division, during the night of the 5th/6th June 1944 part of Operation Overlord.
Parachute and glider-borne troops, commanded by Major-General Gale. landed behind enemy lines on the eastern flank of the invasion area, near to the city of Caen, to secure the beachhead against enemy tank and infantry attacks. Their objectives included two strategically important bridges over the Caen Canal and Orne River, enemy artillery batteries, roads and villages. Then to ‘hold until relieved’ by the forces landed by sea.
Click to read Ralph’s D-Day story in his own words:

“During May 1944 we moved into tents in a secure area on an open plain, the weather was very kind and we all got sunburnt. General Gale paid us a visito to encourage us and outline the objectives. His last words were “I will see you all over there” he was true to his word, going into action with his troops in a glider.

On the evening of 5th June we embarked in our Horsa glider which has been loaded with our equipment earlier in the week. 2 Pilots. 3 Soldiers a Jeep and an Anti-Tank Gun. Our towing plane was a Halifax bomber and we were scheduled to land at 0320 hours on 6th June.

The moon is out and there are 90 gliders in the air. It’s beautiful actually, very beautiful. Then we descend at a very rapid rate, the whole glider is screaming with the wind, absolutely murderous. We can’t talk over the noise and feel the glider shudder as it rips through trees and along a limestone wall. It overturns once, rights itself and goes through the brick wall of a house, then slides for another 100 yards. Gunner Kibbler and I force the door open and see the front of our glider broken off with the two pilots and Sergeant Darby standing there covered in white mortar dust.

My jeep is jammed six feet up in the glider’s tail and my gun is level, so we blow the rear door off with explosives. I drive the jeep out on the fallen door and only then with ropes, and by cutting away the fuselage, can we pull our gun out of the wreckage. We are directed to our gun position in a copse by Captain Baines and told that we have Paras on either flank guarding us. Very soon we see German helmets popping up all over the place in front of us. Sergeant Darby goes off to get help from the Paras. The enemy gets closer, so we have to open fire. Then we come under mortar fire and I get hit in the chest and have difficulty breathing. Kibbler is doing a great job with his Bren gun but eventually the Germans get into the copse and we are hit with shrapnel.

Kibbler appears dead so I drag myself to the jeep but I am hit again as I drive off. Somehow, I get away. Medics find me and take me to a First Aid Post where i slip in and out of consciousness. The FAP comes under mortar fire and a speeding ambulance evacuates me to the beach, then I am on a DUKW amphibian out to a ship where I am winched aboard with a crane. As I go up I think about the bullet in my arm, the bullet in my leg, my foot shot up – the wife is going to kill me!

Back in England, four days later, I reached Horton Emergency Hospital near Epsom Race Course then to Pinderfield Hospital in Wakefield. There I got the sad news that Gunner Kibbler has survived but lost his sight. After convalescing at Nun Monkton near York I was sent home on Leave.

Then back to the Royal Artillery HQ at Woolwich Arsenal, London, for 6 weeks ‘remedial PT’ after which I returned to my unit which was now back in Bulford Barracks. I only recognised a handful of men who I had trained with – so many fresh new faces.

When the Americans started taking a bashing in the Ardennes, we were given an early Christmas Dinner then embarked at Tilbury Docks for a sea crossing to Ostend, Belgium, (and had another Christmas Dinner on board!) Surrounded by burned out tanks, guns and vehicles we manned blocking positions in Arctic weather conditions, dress in white camouflage suits until the German offensive ran out of steam and we were returned to base. 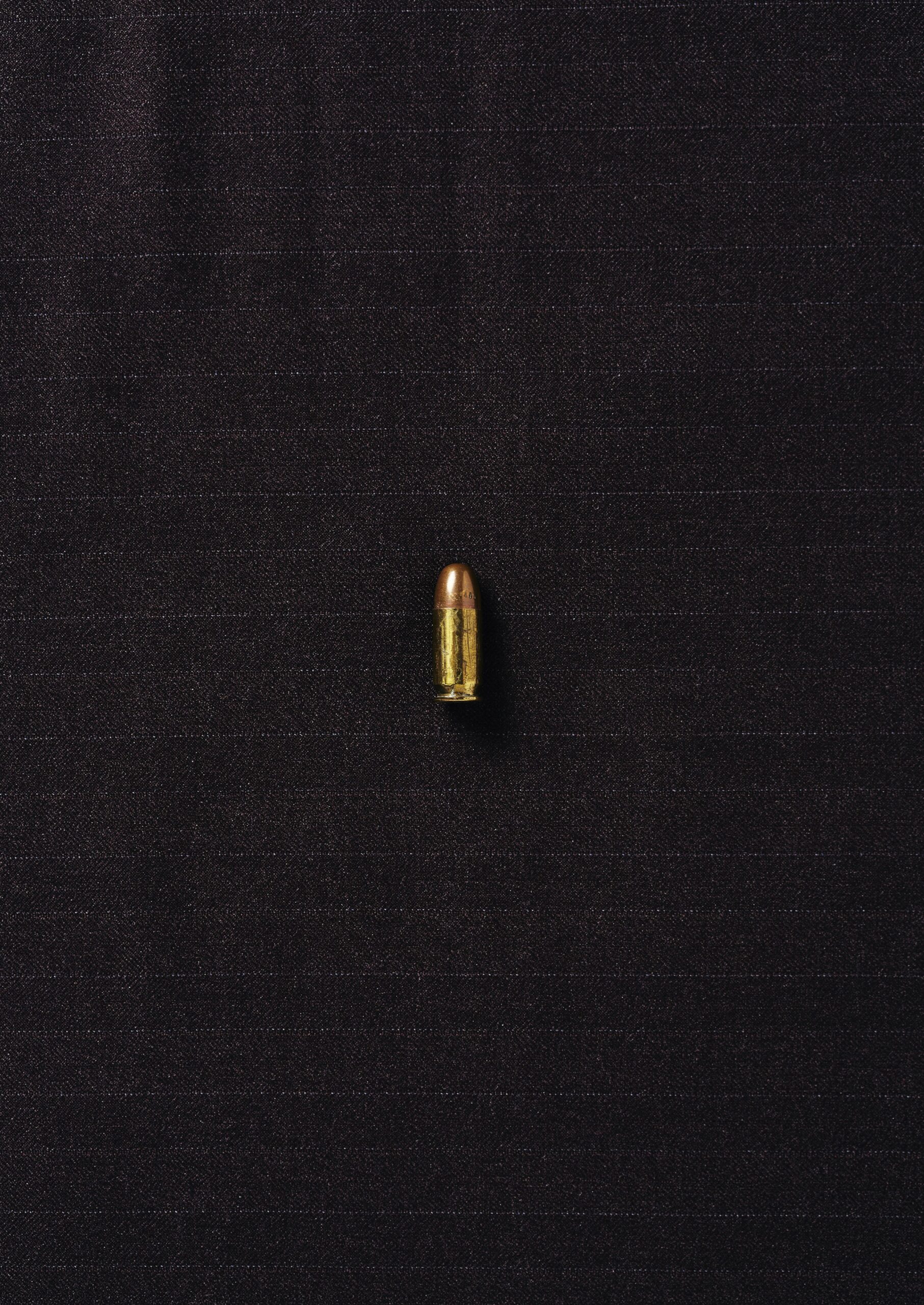 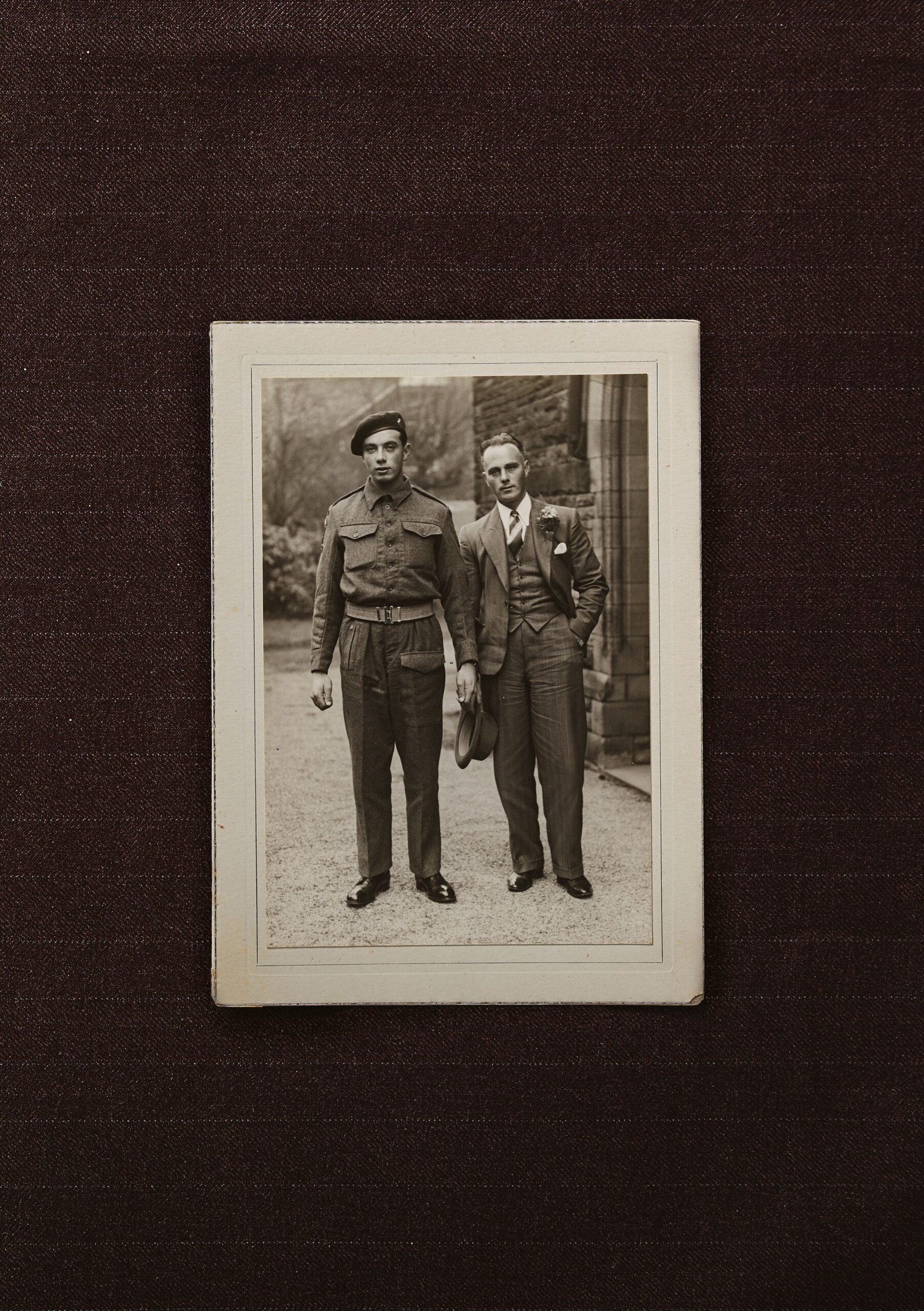 ‘Operation Varsity’ A successful airborne forces operation launched by Allied Troops, part of Operation Plunder, the Anglo-American-Canadian assault under Field Marshal Montgomery aiming to cross the River Rhine and from there into the heartland of Northern Germany.

Varsity’s objective was to secure a bridgehead in Western Germany by landing two airborne divisions on the eastern bank of the Rhine near the village of Hamminkeln and the town of Wesel. More than 16,000 paratroopers and several thousand aircraft were involved, making it the largest airborne operation in history to be conducted on a single day and in one location.

Click below to read more of Ralph’s story in his own words:

“As we rolled down the runway, I thought to myself, here we go again. We’re dropping and the visibility isn’t good. Before we know it, we’ve overshot the target and land between the river and a big squad of German Parachutists, young ones. We’re trapped.

We’re on their territory and they are not happy. They’re firing at us, getting really worked up. We try to fire back but the cover is bad. I see the glider pilots trying to give themselves up, they know they landed in the wrong place and we’re outnumbered. I never thought they’d shoot them, but they did – shot them with their hands in the air.

We keep our heads down and fire back. My Sergeant gets down by the side of the road, but he lasts about two seconds. They keep pelting us, so we can’t go anywhere. I have a look at my mates, but I can’t see them. All of them have been shot, i’m the only one left and I surrender. They were surprised to see anyone still alive. A young Soldier threatens me with his gun, but an old Corporal runs right up to me and wraps me up in his arms and bundles me away. I can’t think what to say. I don’t understand what’s happening, He puts me next to this wounded American, smashing looking lad. There’s others too. The Corporal puts his camouflage sheet over us and leaves us there.

He’d saved my life, run 50 yards and got me out of the firing line. A German Corporal, I could not believe it. Even more surprisingly, whilst we were assisting our wounded and burying the dead a German Tank Commander stopped his vehicle and signalled us to put our wounded on his tanks. It seemed very ironic that British Anti-Tank Gunners were being rescued by German Tanks!”

Ralph eventually ended up in Stalag11b at Fallingbostel, near Hanover, where paratroopers captured at Arnhelm were held. After six weeks as a Prisoner of War and as the British 7th Armoured Division approached, the Germans handed over control of the camp and British sentries were posted. Field Marshall Montgomery was one of their first visitors bringing English newspapers and cigarettes.

Ralph was flown back to RAF Lydd in Kent sitting on the floor of a bomber again, but this time without a parachute! All repatriated Prisoners of War were given leave and then Raslph was posted to Haverfordwest where he celebrated VE Day with the locals. His new RA unit was then sent back to occupied Germany where they were based in the Hartz Mountains, back to the Arctic conditions, amongst snow covered mountains.

In March 1946 Ralph accepted an offer of a discharge from The Army. 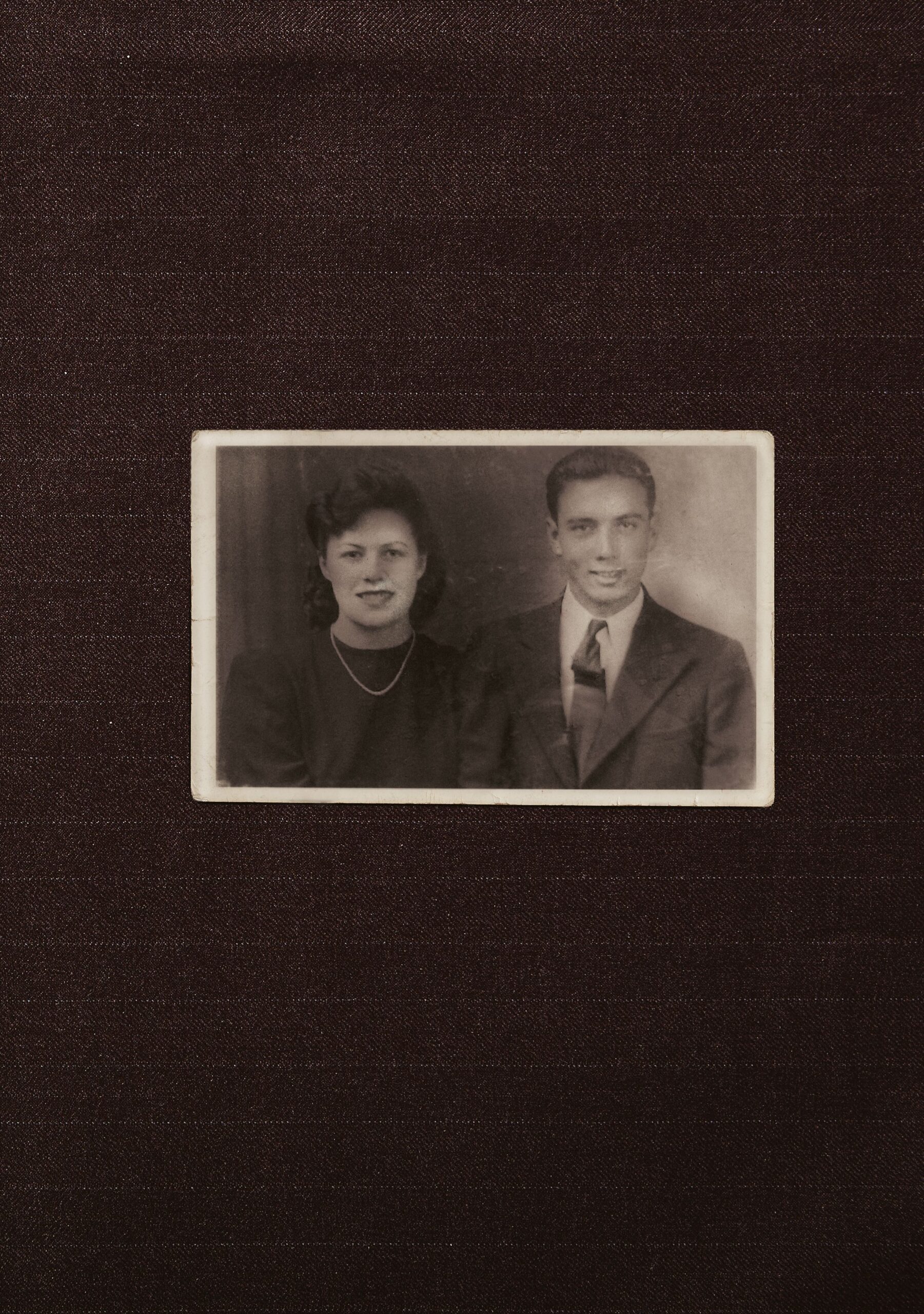 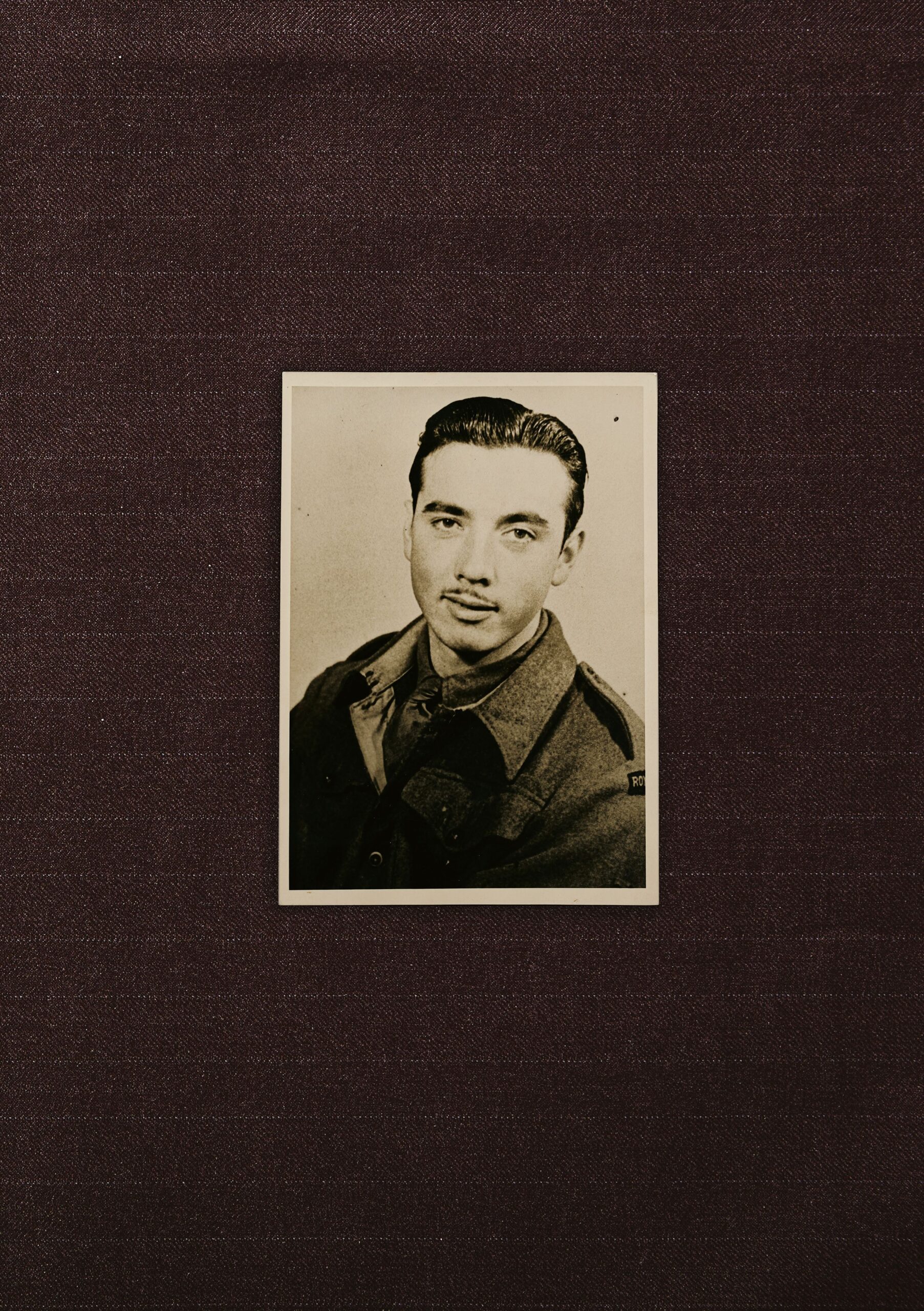 Ralph had a remarkable life and passed away peacefully at 11am on Remembrance Sunday 2016.

Read more to see what medals Ralph was proudly awarded for his service.

Ralph Jones and his Medals

Ralph was awarded 4 medals for his service, they were;

‘Still got a bullet stuck in my stomach, bit of an annoyance.’