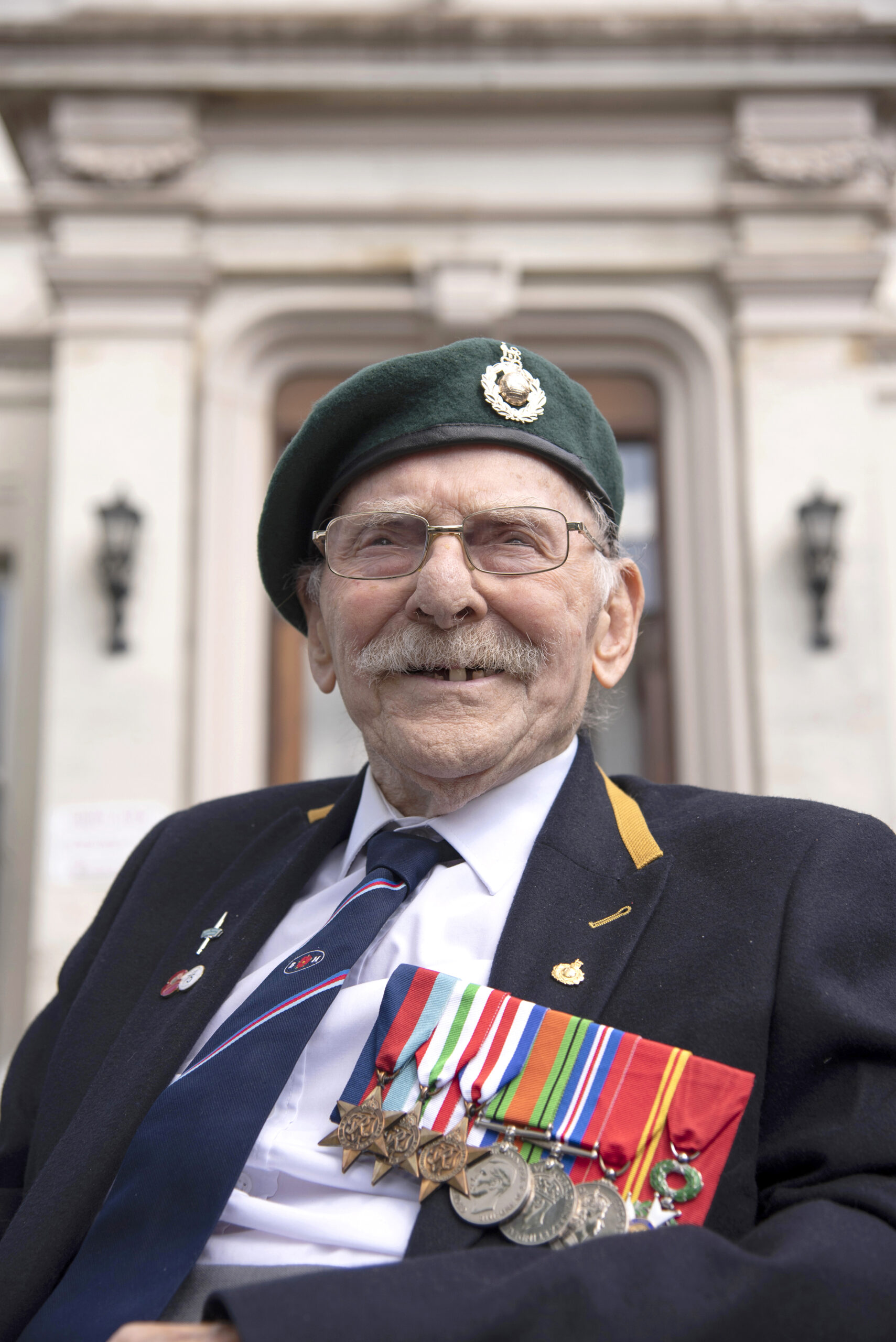 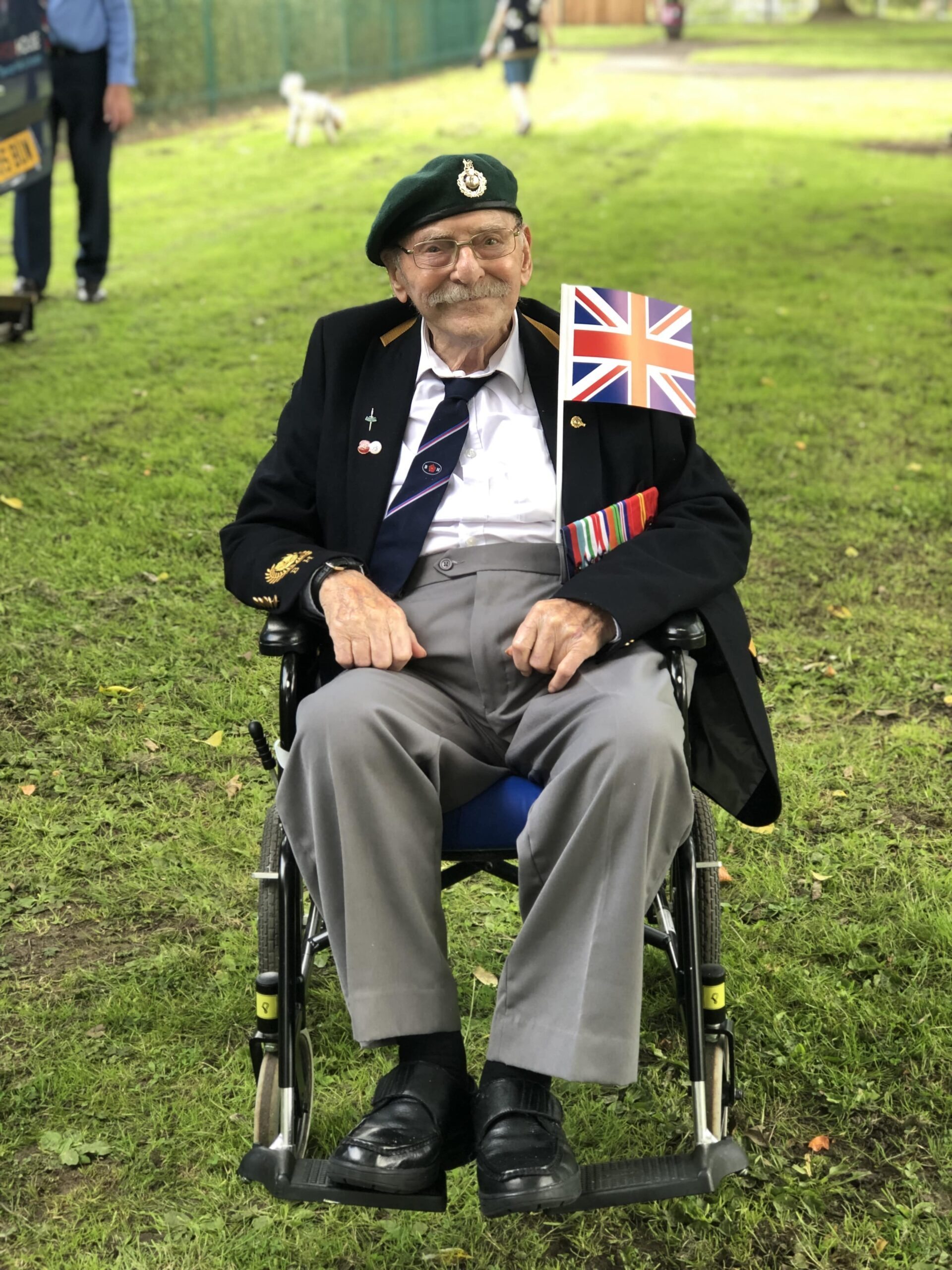 George was brought up in Ardwick by his parents, George and May and was the youngest of 3 siblings.

He was a clever lad and top in English and Maths at his Junior School. As a teenager George would cycle from Gorton to Levenshulme. When riding his bike he met and made friends with Ken, a local Butcher’s Lad. Ken was the brother of the young lady, Connie, who George went on to marry in 1945.

Before George volunteered to serve his Country, he worked at a Salvation Army Red Shield Club, serving hot food and drinks to the troops as they passed through London’s major railway stations on their way to War. His sister, Edna, was also working in London for the Salvation Army at the same time and they met up and lived through the London Blitz during the winter of 1940/41.

In February 1942 George volunteered to serve in the Royal Marines as soon as he was old enough and completed his basic training at the Royal Marine Depot, Lympstone in Devon. In November of the same year he was selected for service in the elite Royal Marine Commandos and trained at their famous Basic Training Centre at Achnacarry Castle near Fort William in Scotland.

A large allied amphibious and airborne operation which opened the campaign to liberate Italy from the Axis Forces. It began on the night of 9th/10th July 1943 and ended on 17th August 1943. Strategically, the invasion achieved it’s objectives, driving Axis air, land and naval forces from the island and opening the Mediterranean sea lanes to allied merchant ships for the first time since 1941. The Italian leader, Benito Mussolini, was toppled from power and the way was opened for the allied invasion of Italy.

Just after midnight 10th July 1941, 41 Commando successfully stormed the beach and climbed the clifts to attack enemy positions near the town of Pachino in Southeast Sciliy. Over the next few days they exploited the invasion’s success with active patrolling and further assaults, protecting the left flank of the main invasion force. On 14th July a diversionary landing was planned to go in North of the City of Catania whilst the 8th Army attacked from the South. The Commandos were to go ashore from two infantry landing ships; HMS’ Queen Emma and Queen Beatrix. On 15th July they were taken by RN Destroyers from the beach at Pachino to Syracuse but as the landing ships had not arrived the operation was postponed for 24 hours. Eventually, after boarding the landing ships, the assault was cancelled because the 8th Army’s advance had stalled. During the night of 16th/17th July the fully loaded ships were caught in an air raid off Augusta and despite a smoke screen being put up, they were hit – inflicting significant casualties.

17th July 1943 George was onboard HMS Queen Emma when it was bombed by enemy aircraft and he was wounded. 14 of his comrades were killed, another 66 wounded and then evacuated to Malta. 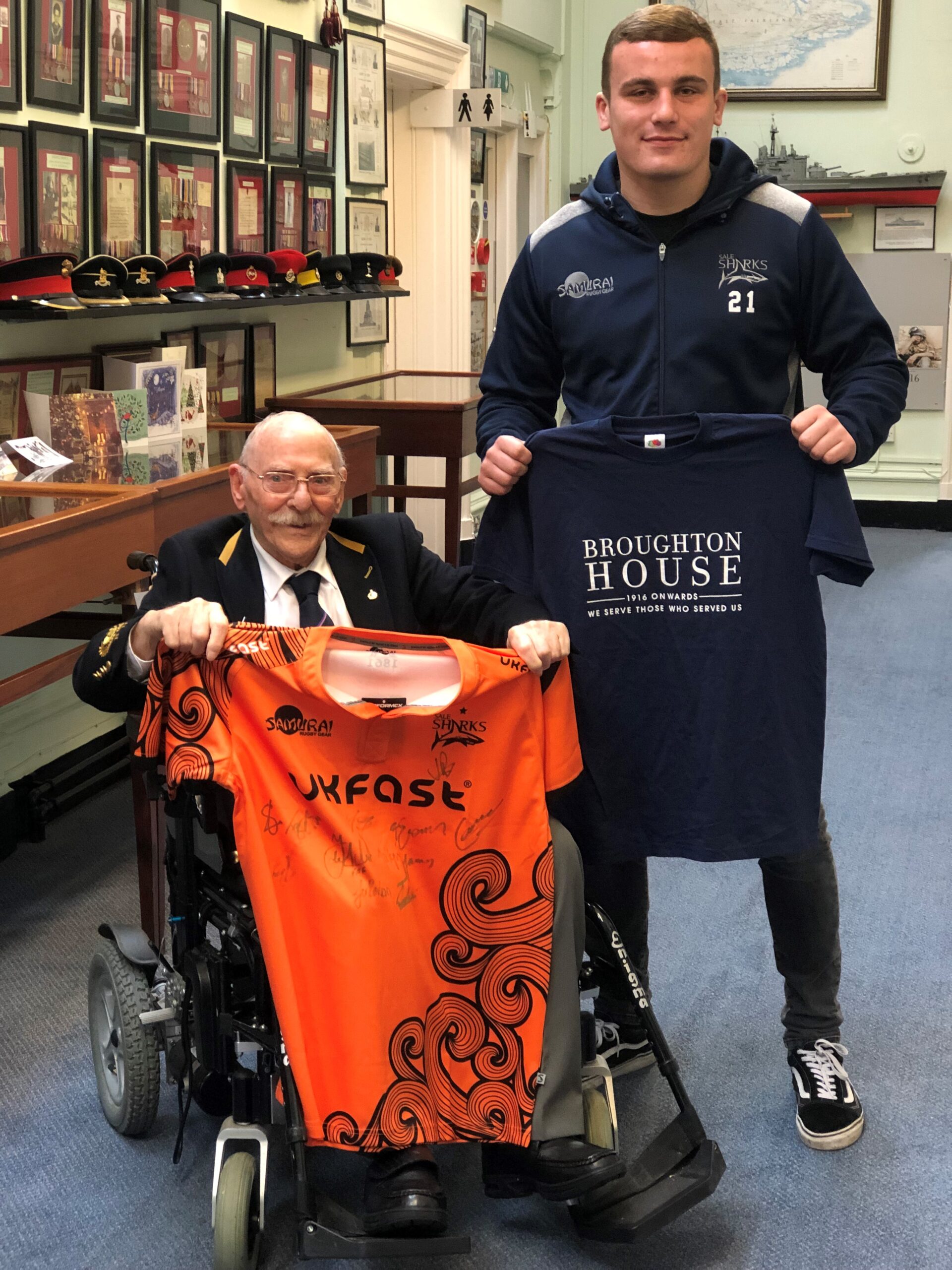 D-Day 6th June 1944, George was only twenty years of age when he took part in the Normandy landings. He was in the 41 Royal Marine Commando which landed with the first wave on Sword Beach alongside Major Chaplin, the Officer Commanding Y Troop. He remembered this day vividly for the rest of his life.

George’s Troop Sergeant, Major Denis Fawcett MBE remembered George: ‘My earliest recollections of George go back to the winter of 1942. After his recruit training in South Devon he was posted to D Company in which I was a Corporal. He was a quiet lad and perhaps a wee bit shy. He was the sort of chap who go on with things without a lot of fuss. Then he served with me in Y Company.’

Sword Beach and the D-Day Landings

5th June 1944 the men of the 41 Commando, Royal Marines, had been assembled in a ‘sealed off’ marshalling area near Southampton there they weren’t allowed camera or to make telephone calls nor engage with any communication with the outside world. This was to preserve the secrecy of the greatest seaborne invasion in history and give the enemy a nasty surprise.

5th June 1944, 9pm, 41 Royal Marine Commando departed from Warsash on the River Hamble aboard five Landing Craft Infantry LCI(s)s. Their orders were to land on the ‘Queen White’ beach at Hermanville-sur-Mer and then move West to Lion-Sur_Mer to link up with their fellow commandos.

6th June 1944, 3am, the assault on Sword Beach began with an aerial and naval bombardment of German coastal defences and artillery sites. The landing was to be concentrated on ‘Queen Red’ and ‘Queen White’ beaches in front of Hermanville-sur-Mer, other approaches being impassable due to shoals.

6th June 1944, 7:25am, Amphibious Duplex Drive (DD) tanks of the 13th/18th Hussars that had ‘swum’ ashore from their landing craft landed on the beach closely followed by soldiers of the 8th Infantry Brigade (South Lancs and the East Lancs Regiments) and Royal Engineers in Armoured Assault Vehicles (AVREs) and other specialised armoured vehicles. The Engineers set to work clearing mines and obstacles under a steady hail of small arms fire and artillery fire from Périers Ridge just South of Hermanville. Resistance on the beach was initially strong, with wrecked vehicles piling up and casualties mounting; however, with most of their armoured vehicles successfully landed the beach was quickly secured.

6th June 1944, 8:45am, 41 Commando came ashore and ‘all hell was let loose’ facing heavy fire and losing many men including their RSM, their Naval Gun Support Officer (NGSO) and 2 I/C, Major Barclay.

6th June 1944, 9:30am, Engineers had cleared 7 or the 8 exits from the beach, allowing advance inland to begin. Having fought their way off the beach through the enemy’s defences and seen many of their friends cut down by machine fire, George and his comrades marched down the coastal road towards Lion-sur-Mur.

Three armoured vehicles from the Royal Engineers, equipped with BESA machine guns, were ordered to accompany them. As George’s Y Troop approached the town a well-concealed German PAK 50mm anti-tank gun ambushed the tanks destroyed all three and stalling the assault. The Commandos took cover, taking up positions on both sides of the road. Their location had now been revealed, the Germans fired a ferocious mortar, rocket, and artillery bombardment, but the Commandos were unable to respond as they had expended all their mortar bombs in the initial attack. Facing overwhelming enemy forces and heavy artillery fire they could only wait for reinforcements and more ammunition.

June 6th 1944, 1:30pm, the Lincolnshire Regiment and the Royal Ulster Rifles came ashore then moved up to the Commando’s position bringing with their a replacement NGSO. He immediately radioed urgent fire support instructions to ships waiting offshore commencing a bombardment which subdued the enemy’s fire but it was too late in the day for the Commandos to launch and effective assault. Casualties for the day were approximately 140 killed, wounded and missing.

When dawn broke the German Artillery fire began again, pinning the Commandos down and supporting the defenders for another two hours. From overhead came the awful drone of the three approaching Heinkei bombers followed by a flight of Spitfires racing to intercept them but not before they had rained down anti-personnel bombs on the Marine’s position; killing several men including their Forward Artillery Observer and severely wounding their Commanding Officer.

George was one of those caught in this air attack, blasted by anti-personnel bombs and peppered with shrapnel, the next thing he remembered was finding himself on a boat heading back to England. He eventually arrived at a hospital in Hereford after a long journey in an ambulance train, he lived with shrapnel in his body for the rest of his life.

During his time there he was commended by Stockport Corporation on 6th February 1964 for rescuing a woman from a burning house ‘under difficult circumstances’ and also helped to deliver a baby!

George was proudly awarded many medals for his services; click here to find out more!

George Simms and his Medals

George was awarded 7 Medals in total:

George also received a Long Service Medal from the Fire Service where he worked for 25 years! 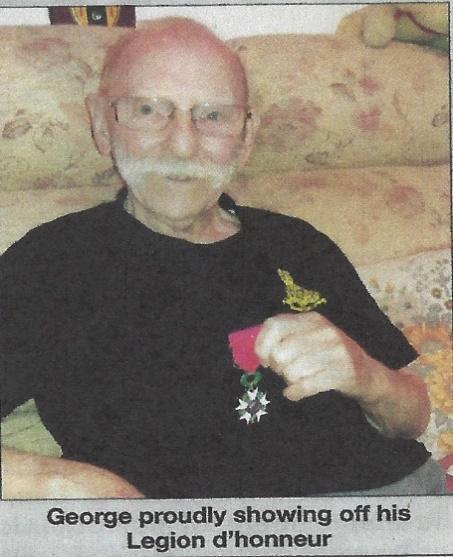